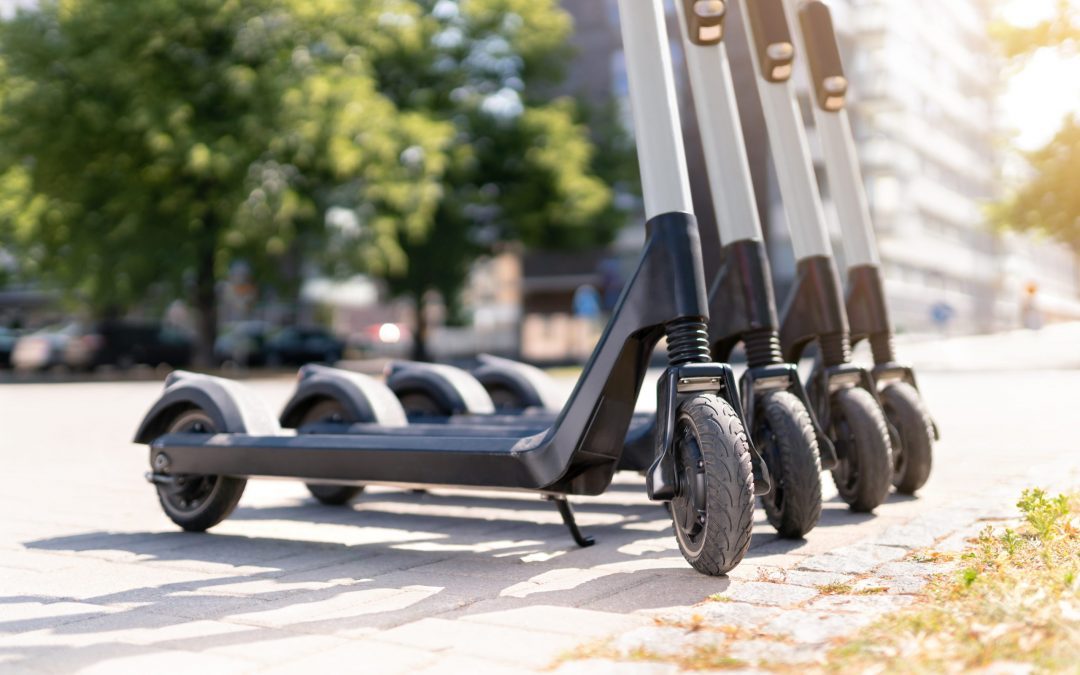 Micromobility means of transport, or “last mile” means of transport, are in the broadest sense vehicles designed to transport individuals over short distances. In a narrower sense, they are electrically powered light vehicles – such as e-scooters, e-scooters and Segways. Due to the increased occurrence of such light vehicles in recent years, the legislator has issued a regulation in 2019 on their classification and use in road traffic. The so-called Elektrokleinstfahrzeuge-Verordnung (eKFV) (regulation on electric micro vehicles) came into force on June 15, 2019. It permits the operation of e-vehicles in public spaces, provided that they have a handlebar and do not exceed certain dimensions. The maximum speed is limited to 20 km/h. They may not be used on sidewalks and motorways – only on inner-city roads and on cycle paths. E-skateboards, also known as “hoverboards”, as well as all other electric fun vehicles without handlebars are not considered to be miniature electric vehicles within the meaning of the regulation and therefore may not be moved in public spaces at all.

First boom, then lull – then recovery

There is no question that micromobility enriches individual mobility and is therefore promising for the future. At the beginning of 2019, the management consultancy McKinsey & Company published a study that established a huge market potential for Micromobility. The study found that the market is growing two to three times faster than the market for car sharing and e-mobility apps. By the year 2030, 150 billion dollars in Europe alone could be generated with micromobility, and worldwide up to 500 billion dollars. In 2020, however, the corona pandemic hit the world – and that changed the situation. In the corona lockdown, inner-city mobility came to an almost complete standstill; business with e-scooters and e-scooters shrank by around 60 % in Germany. Manufacturers such as the e-scooter producer Metz Mecatech had to file for insolvency. In the meantime, however, micromobility is on the rise again.

Corona Pandemic: Curse and blessing at the same time

Paradoxically, the corona virus is now proving to be a revenue driver for the micromobility industry: many professionals with short commutes, who used to travel by bus or train, now prefer to use rented scooters or e-scooters to get to work for fear of infection. The many travel warnings and the associated increase in inner-German city tourism are also boosting business. For the surviving providers (Lime, for example, swallowed the loss-making provider Jump in June), this means that business could even be better in the future than ever before. In some cities, such as Hamburg, this is already the case today: The supplier Tier stated that demand here in June grew twice as much as in the previous year despite the crisis. If no further complete lockdowns are imposed, McKinsey forecasts the same micromobility market potential for 2021 as before the pandemic.

Sense and benefit of micromobility

The purpose of micromobility is not to persuade drivers or public transport users in general to switch to miniature electric vehicles. It is rather a matter of integrating micro-electric vehicles into the transport matrix in a way that conserves resources and reduces emissions. If e-scooters are only used by people who are too lazy to walk, nothing is gained. But if they are used by people who used to drive to the city center by car and now only drive to the Park & Ride parking lot (where they get on an e-scooter), this will benefit the environment and the community. Micro-mobility is designed to improve the air in cities without reducing the mobility of urban society – no more and no less. Just as it makes no more sense to drive into the congested city center to stroll and store, it makes no more sense to take an e-scooter to the beverage market to buy two cases of soda. E-scooters are there to help commuters and tourists overcome the “last mile” – that is, the distance between the S-Bahn stop and the workplace, which is so long that people have never even considered taking the S-Bahn to work. The key to this is networking: Using digital connectivity, every road user should be able to use the vehicle that suits his or her needs at all times. 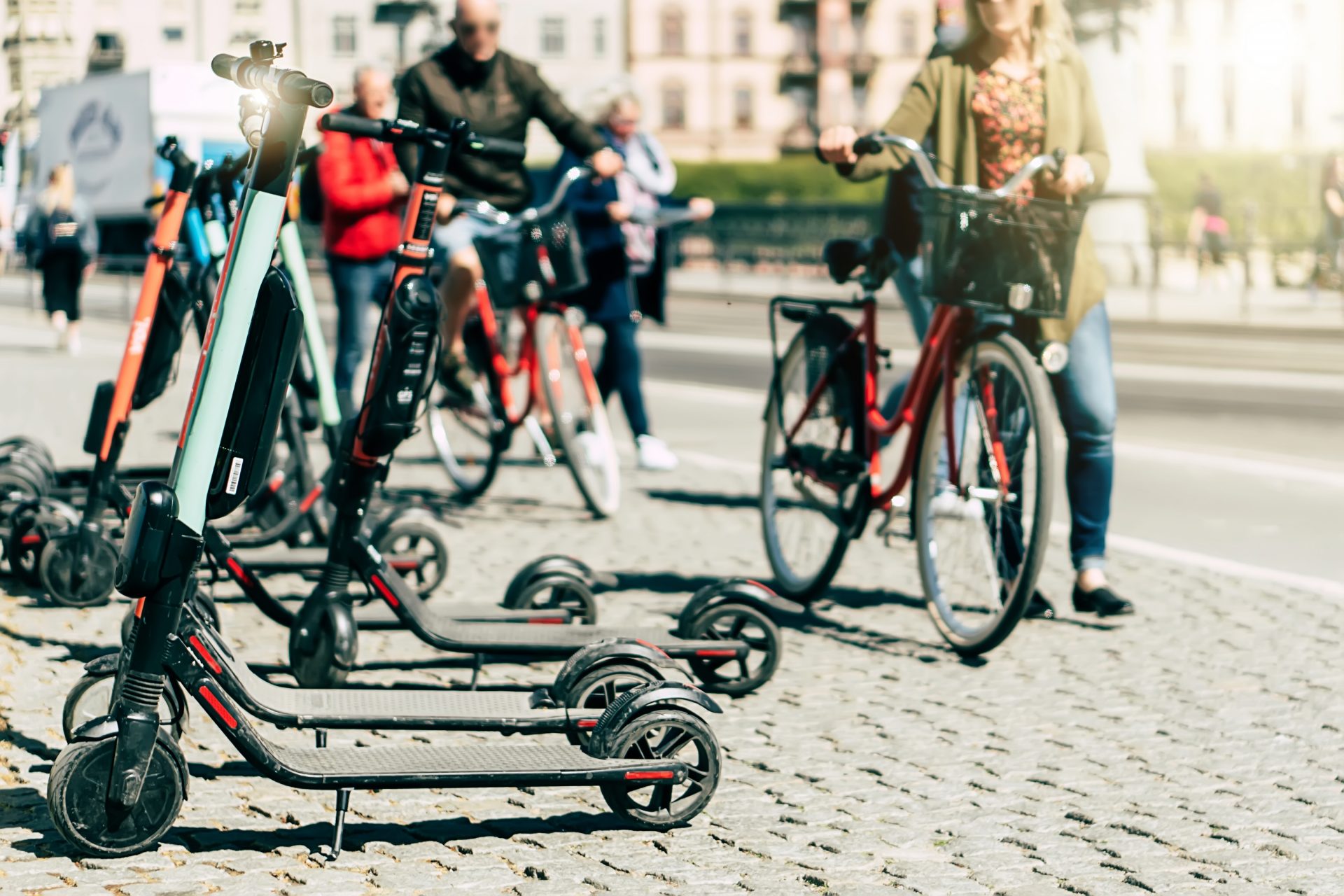 However, micromobility can only be a good solution for the last mile if urban development is geared towards it. A recently published study, which examined metropolitan areas in the USA, Canada, Japan and Europe (including Hamburg) for their traffic planning, came to the conclusion that this is hardly ever the case anywhere. The large cities are generally poorly prepared for the implementation of this relatively new mobility option. For one thing, the parking of micromobility vehicles in public spaces is not regulated by law, which causes many problems. Wildly parked scooters and scooters are a nuisance almost everywhere; there are always protests and citizen complaints. Several German municipalities have therefore imposed rigorous parking bans and threatened e-scooter operators with fines. In Cologne, Düsseldorf and Berlin, the operators’ security services have for some time been ensuring more disciplined parking practices. On the other hand, inner-city traffic management is not designed for slow means of transport (6-30 km/h). What is needed, therefore, is new, modern urban planning. Improving the infrastructure for cyclists, for example, would also benefit the users of small electric vehicles. If commuters can then be guided via app to a park area close to the city center, from where they can easily reach the city center with e-scooters, then everyone will be helped – the city, commuters and the climate.After all, digitally managed parking is no longer an issue of the future.

Micro-mobility offers urban society the opportunity to reduce traffic congestion in the conurbations while remaining fully mobile. The more people with a strong awareness of sustainability accept micromobility as a new pillar of the traffic matrix, the more it will spread – and the less driving in inner city areas will be necessary or even desirable in the future. However, micromobility is a double-edged sword: it is only environmentally friendly if e-scooter rides replace car and motorcycle rides. If, on the other hand, e-scooters are only used instead of your own feet, there is no benefit to the environment. On the contrary: most rental e-scooters are produced in China – the energy for them comes from Chinese coal-fired power plants. The batteries also require rare raw materials that are mined with high environmental impact. Whether an expansion of micromobility is to be welcomed therefore depends on how well micromobility can be linked to macromobility – and that in turn depends on how quickly and how far-sightedly cities and municipalities now modernize their traffic infrastructure and traffic management.